The Ramos-Pauli is a family of three, if you do not count the three dogs and two cats! Rafael, Sarah and Valentina love animals, gardening and creating a cozy home space.

Rafael is a painter who grew up in Mexico City. He studied art and also apprenticed for many years. He grew up inspired by his father, who was also a painter. Sarah is also an artist, born and raised in Alaska. She studied Industrial Design at the College of Arts and Crafts in San Francisco. Like Rafael, Sarah has always been inspired to create. Valentina, their daughter, loves to draw and paint as well. The dining table is often filled with paper and art supplies for one project or another.

While they lived in Mexico, where Valentina was born, Rafa exhibited his paintings professionally. He hopes to soon be showing his work in Sedona. Before Valentina was born, Sarah ran a jewelry design business for over 10 years and most enjoyed making one-of-a-kind pieces for small boutiques and organizing craft shows where one could find really beautiful, handmade designs. She is now returning to her jewelry work and is curious to see what kind of inspiration the high desert might provide! They moved to Sedona, from Tepoztlan, Mexico in June 2012.

While touring the area kindergartens, they opened the squeaky gate at the Red Earth Waldorf Kindergarten, and knew in that moment they had found the school for Valentina. It was filled with love. This powerful feeling is the crux of what has driven us to dedicate weekend after weekend, for over a year now, to the birth of something truly magical, Running River School.

The year unfolded with immense richness for Valentina, Rafa and Sarah as they connected with the lovely community of the kindergarten. It was among many of the parents from the kindergarten that the conversation began about where to send our children for first grade. Several were interested in home school, but also wanted the skill of an experienced Waldorf teacher and the social opportunities found within a group discovering the world together. It became important to retain the feeling of heart found at the kindergarten, and the great care placed on the development of a "whole" child, influenced by Rudolf Steiner.

This methodical way of educating the children, while respecting each amazing and intricate stage of development has given Valentina an immense enthusiasm for learning and a passion for school. Sarah and Rafa are amazed by how fast children grow and are keenly aware of what a brief time childhood is. Rafael and Sarah want to give Valentina the chance to truly be a child, enjoy her imagination, and grasp the love of learning with her whole being. They want her to develop tender friendships with her classmates, as they learn to communicate their own needs and wants, while also listening to each other. They could not be happier with how Running River School is growing, and feel good each day sending their child to school knowing that she is being truly nourished: mentally, emotionally, and on a soul level.

Sarah is beginning to feel the devotion the founding families have for growing Running River School is a life's work, by accepting social responsibility as they step boldly into what they believe; envisioning a better world by believing all children are worth this creative effort.

"You must be the change you want to see in the world."  - Mahatma Gandhi 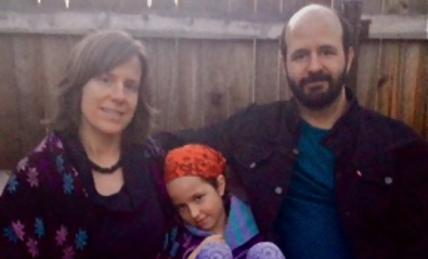