Angela was born and raised on a dairy farm in Viroqua, Wisconsin where she enjoyed the freedom to explore nature, help to care for the animals and grow crops. Angela attended a Waldorf-inspired preschool at age 3, which later evolved into the Pleasant Ridge Waldorf School in Viroqua. She has extremely fond memories of her preschool experience -- circle time songs, teatime, playing with wooden toys and dolls, and making homemade ice cream from snow! Angela went on to Kindergarten at a public school. Angela feels this was not the best place for her to thrive.  She enjoyed learning but was uninterested and confused with the way certain subjects were presented.  By the time she started college, she was not excited about school and had no sense of direction for her life. Angela dreamed of creating a different educational experience for her children someday.

Angela enjoyed numerous jobs in sales and marketing throughout her 20’s. She found a passion for interior design while helping a friend decorate his home. She took a job in Chicago with a furniture and interior design company and found fulfillment in creating beautiful spaces for people to live in. At the same time, she began feeling the stress of urban life. She decided to join a yoga class and fell in love with the practice. Angela went on to teach yoga classes including an after-school yoga program for grade school children and discovered a love for working with children.

Angela moved to Sedona 9 years ago after attending a yoga retreat, and is now blessed to be the mother of two beautiful daughters -- Bella (7 years) and Ren (5 years). Bella recently graduated from the Red Earth Waldorf Kindergarten (REWK) after 5 years, and Ren is in her 3rd year there. Angela had the honor of assisting Miss Charity for one year. Angela's appreciation and understanding for Waldorf Education grew over the years by her experience with Miss Charity at the Kindergarten. REWK is a gentle, loving space with positive, empowering language and direction for pre-school children to grow and blossom. They are safe and free to be themselves without judgment.

Angela desired to continue this style of education for her daughters in grade school and beyond. She had decided to home school her children until a beautiful moment in time at a dinner party when a friend proposed starting a school. A group came together of like minds and Running River School was born! Angela feels very grateful to be part of this important endeavor and is thrilled by Bella's development in her first grade class, led by Mr. Aaron. Bella is excited to go to school everyday. She loves her teacher and classmates, and is enthusiastic about all she learns in school -- form drawing, learning the letters of the alphabet introduced by deeply meaningful stories, knitting, painting, playing the recorder, and so much more! Mr. Aaron has created a classroom culture that is nurturing and loving with a sense of togetherness. The curriculum is challenging, academics are integrated with arts, music and movement, and learning happens naturally and rhythmically.

Angela continually strives to become more present and to know herself on a deeper level. She makes an effort to sharpen her awareness, recognize patterns in thinking, and release unhelpful beliefs to overcome limitations. Partially thanks to this process, Angela has become very drawn to the teachings of Rudolph Steiner, whose educational model influenced the school she attended as a young girl as well as the schools her daughters now attend.

She looks forward to continuing to develop a better sense of the spirit of Waldorf education and is excited about the possibility of a career as a Waldorf teacher.  Angela participated in a Waldorf Foundations Course to help guide her to the next step, possibly teacher training, and helping to grow Running River School, as well as provide insights and tools for her parenting. 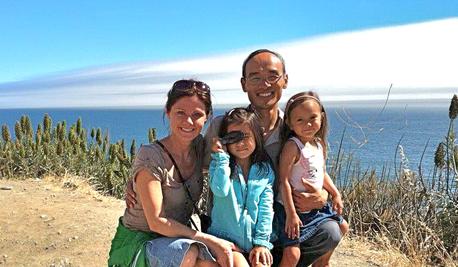