Like many of the other Running River School (RRS) parents, Nathan Hansen (Nate) and Guadalupe Pollock (Lupita) were introduced to Waldorf education through theSedona Children's Garden. It is here they learned what it meant to educate children in a respectful, loving and socially responsible manner. Abandoning this type of education was not an option, and as an independent Waldorf grade school did not already exist in Sedona, they gladly joined the parent group to create a more meaningful educational experience for their children Finn and Lily.

Nate has worked in the field of education for nearly a decade, splitting his time between classroom instruction and administrative duties. Before obtaining his MFA in Creative Writing fromAntioch University Los Angeles, Nate worked for various Arizona newspapers and magazines as a journalist. Currently, Nate co-directs the English Department atOak Creek Ranch Schoolin Northern Arizona, an international boarding school charged with preparing children with ADD, ADHD, and learning process disorders for post-high school studies. He has incorporated his passion for literature with a refined discipline he learned from years of service in the United States Army, creating a challenging, yet personally reflective curriculum. Nate feels he is fortunate to have autonomy in his classroom, something RRS also strives to offer its teachers. When he isn’t mentoring young adults, Nate enjoys reading, writing, and an assortment of Finn and Lily’s activities, be it skateboarding, "scooter-ing", dancing, or building with LEGOs.

Guadalupe Pollock (Lupita) is a fifth generation Arizonan whose family helped found Flagstaff, AZ in the late 1800s. After graduating from Sedona's ownVerde Valley School, Lupita traveled to California to attendPitzer Collegewhere she earned a BA in Art. She later attendedYavapai Collegewhere she also earned an Associate’s Degree in Graphic Design, before starting an online boutique for her handmade children’s clothing. She enjoys sewing, other handicrafts and being a part of the creative effort that is Running River School. Currently, she is at home with Finn and Lily and working on many of the administrative tasks of RRS. To her surprise, after many years of searching for a path, she was led to it serendipitously; and now can’t imagine doing anything else. She believes the entire face of education is in dire need of transformation to meet the children of today as well as the social, economic and environmental challenges of our current culture. She also believes that Waldorf education meets this need quite beautifully. 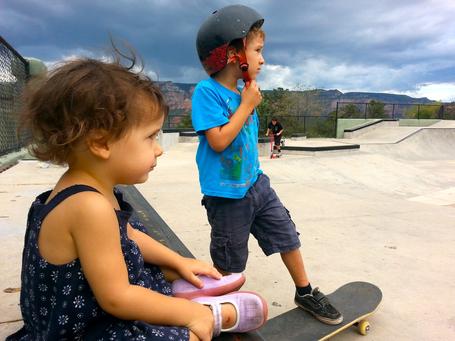