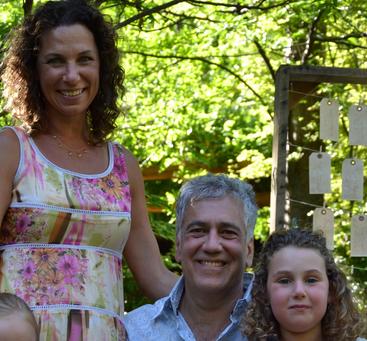 Robert and Madhu are believers in the original meaning of the word "education". It is derived from the Latin word “educare,” which means "to draw out that which lies within". They believe the Steiner-Waldorf model genuinely embodies this philosophy. They are as enthusiastic and delighted as their daughter Sharadevi that Running River School has allowed them to continue with the type of education they feel so closely connected to. They are passionate about the education of all children who inherit this Earth; and unfortunately, also inherit our mistakes. The children of today have a serious task ahead of them regarding proper stewardship of our planet and its people. They believe this task, in part, can be aided by a more holistic form of education, such as the model that has been adopted by Running River School, a grade school inspired by Waldorf education, in Sedona, AZ.

Robert Abrahamson O.M.D., L.Ac. (AZ, CA), Dipl.Ac. (NCCAOM) is a Doctor of Oriental Medicine with 37 years experience in the art of Acupuncture and Chinese Medicine. He has been living and working in Sedona for the past 20 years with his wife Madhu and daughter Sharadevi. Dr. Abrahamson studied in San Francisco, England, India and China. Robert has taught Acupuncture, Shiatsu and QiGong workshops in Europe, Asia and the United States. He teaches herbal medicine on the post-graduate level, and loves to inspire his patients to take medicinal herbs. At present, he is on faculty at PIHMA College in Phoenix, and the Academy of Chinese Healing Arts in Switzerland. He also currently runs his own acupuncture business, Sedona Acupuncture.

Madhu Wolvekamp grew up in Holland where she received a B.Ed in Primary Education. After some time spent exploring the world through travel she lived and worked at an independent, international boarding school in England based on the Osho vision. Madhu's continued travels eventually brought her to Sedona where she trained and worked as a Massage Therapist, Advanced Craniosacral Therapist and a Reiki Master. While currently raising their daughter, Sharadevi, she has rediscovered her childhood passion of being with horses, a passion which she meaningfully shares with her daughter.